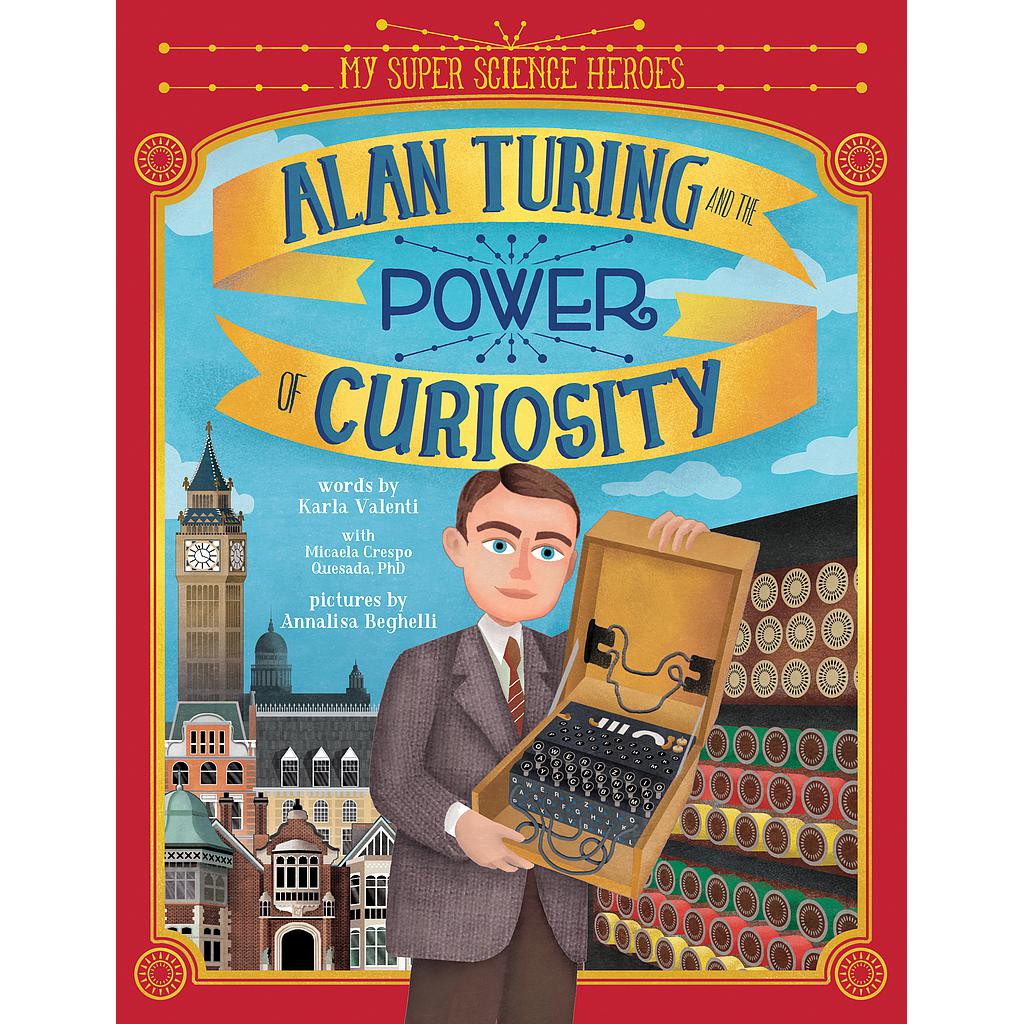 Alan Turing and the Power of Curiosity

https://onlinebookfair.com.au/shop/product/9781728220437-alan-turing-and-the-power-of-curiosity-115834
One sunny day in June, a new super science hero was born. His name was Alan Turing. When Super Evil Nemesis calls on his minions to confound and confuse Alan because of his incorruptible curiosity and profound puzzle powers, it turns out he's not easy to defeat.
This is the amazing (mostly) true story of how Alan Turing's superpower of curiosity helped him to become a spectacular scientist and change the world.

Deep in a cave, Super Evil Nemesis and his minions are forming a plan for world domination: they need to stop the spread of knowledge. Their biggest threat is Alan Turing, who has superpowered curiosity.
Super Evil Nemesis sends his minion Ms. Enigma to confuse Alan, in the hopes that his frustration will cloud his curiosity. But no matter what problem she throws at him--mathematics, physics, cryptology, or even biology--Alan's curiosity allows him to solve it!
As the story continues, Alan develops Turing machines, the Bombe, the Turing Test, and much more. Super Evil Nemesis sends more and more minions to frustrate him, but they end up solving puzzles too! Super Evil Nemesis doesn't win the day this time--after all, knowledge is power.
This is both a fact-filled and fanciful biographical picture book. Super Evil Nemesis and his minions cause chaos, while Alan Turing is shown as an inspiring and innovative figure. More information on ciphers and codes can be found in the back of the book, as well as some puzzles and search-and-find challenges for curious readers. A timeline of Turing's life, glossary of terms, and resource list are also included.

How to Use the Site:

MEMBER DISCOUNTS: For Member pricing, please sign in to your Book Curator account.
WISH LISTS: Signing in will also allow you to create a wish list. Just choose the heart icon on each product you want to add. To view your list, click on the heart icon at the top right of your screen.
COMPARING PRODUCTS: To compare products, use the scales icon.
TO VIEW OR COMPLETE YOUR ORDER: Click on the cart icon at the top right of your screen.
SHIPPING: Enjoy the low flat rate of just 12.95 shipping and handling to anywhere in Australia, no matter how large your order is.